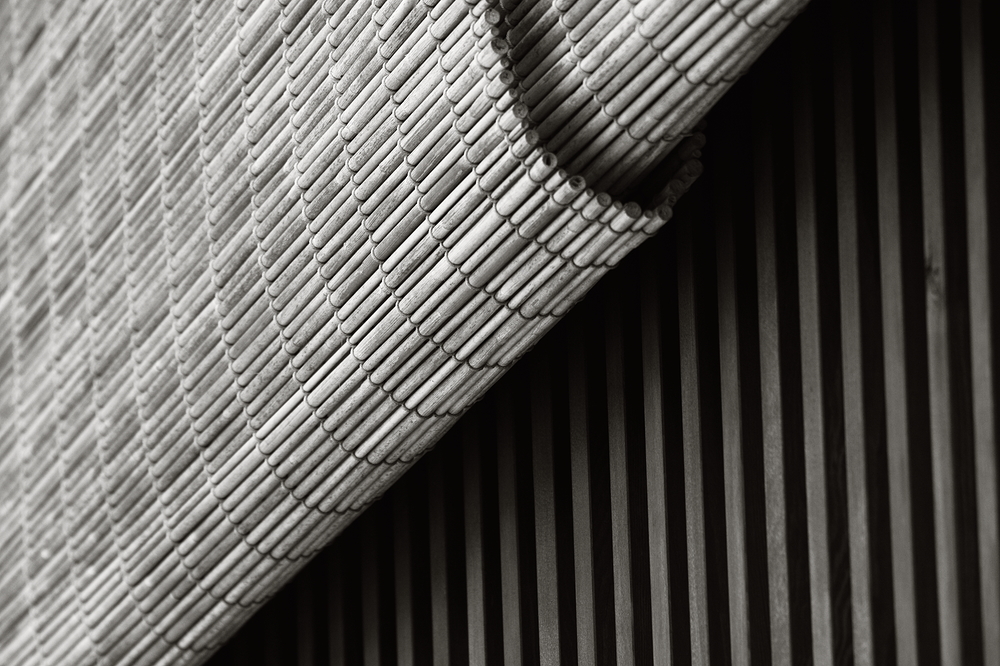 Posted by Stu (From Scotland | Working in Kyoto, Japan) on 9 May 2009 in Lifestyle & Culture and Portfolio.

Sudare are screens or blinds. They are sometimes called misu as well. Theyare used in many Japanese homes to shield the verandah and other openings of the building from sunlight, rain, and insects. Their light structure allows breezes to pass through, a benefit in the hot Japanese summers.
Sudare protect the inhabitants of the building not only from the elements, but also from the eyes of outsiders. During the Heian Era, a court lady would conceal herself behind a screen when speaking with a man outside her immediate family. She could peep through it and see her interlocutor, but because he had to remain at a distance from it, he could not see her. Any unwarranted moves on the man's part were seen as a grave breach of etiquette and a threat against the lady's modesty and purity.
Sudare were also used in imperial audiences. Since looking directly at the tennō ("heavenly ruler") was forbidden, he would sit hidden behind a screen in the throne hall, with only his shoes showing. This practice fell out of use as imperial power declined.
Wikipedia

What a remarkable shot. The graphics are superb as are the contrasting lines and textures.

So simple a subject and so complex an image. Brilliantly composed.

Beautiful fine craft and art... both the sudare and your picture!

Yes, very interesting read and a beautiful capture indeed. What are they made from, Stu? Bamboo?

@Esther K: You got it Esther. They are indeed Bamboo. Thx for visiting. Have a good one!

Bamboo, Stu...Bamboo. I have a fondness for your minimalist approach that extends well beyond the bedroom. On the other hand, if I may be so bold as to venture where no baldy has ventured before*, a slight tweak to the contrast, so that the blacks are even darker would probably make an already sexy thing even sexier. The only reason I'm suggesting this is because the colour picker (for the black, white and grey points) in the levels is an exceptionally good way of getting such saucy minimalism to 'pop'.

@Sash: I reckon you could be right re the contrast there Sashmomo. I may well re-work and re-post time permitting. This could be one to print and keep.

Very Zen in the simplicity. Lovely

It is most definitely one to print and keep. Speak to you about that and more on Friday.

Excellent image. These things are great. As it got lighter in the spring, I went looking for these to keep my monk's cell (tiny bedroom actually) dark. They did that but let the breeze through as you mentioned.