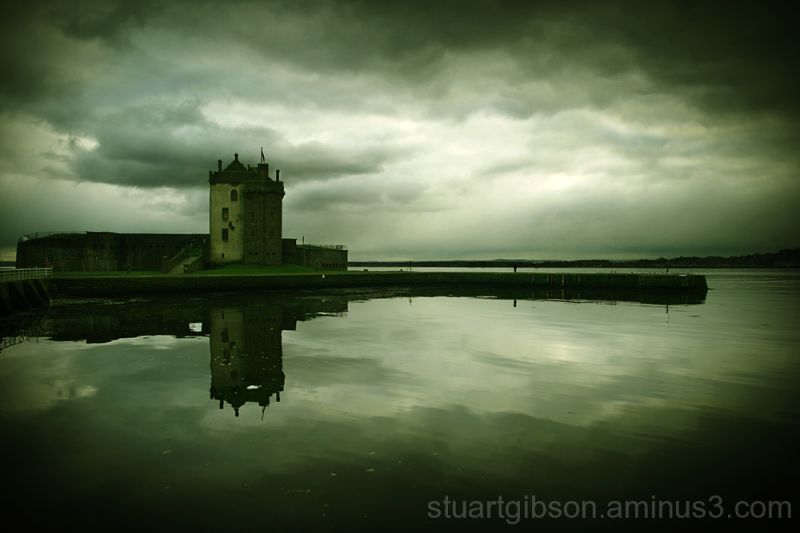 Posted by Stu (From Scotland | Working in Kyoto, Japan) on 9 January 2009 in Architecture and Portfolio.

Broughty Castle is a historic castle in Broughty Ferry, Dundee, Scotland, completed around 1495 although the site may have been first fortified in 1454 when the fourth Earl of Angus received permission to build on the site. The main tower house forming the centre of the castle with four floors was built by Andrew, 2nd Lord Gray who was granted the castle in 1490.
In 1860 renewed fears of a French invasion led the war office to rebuild and fortify the site. The site was rebuilt according to the designs of Robert Rowand Anderson. The walls of the main courtyard were rebuilt and new wing and courtyard were added to the tower. A caponier was added along the South-East side of the courtyard. Emplacements for nine large guns were also constructed. A small enclosure on the west side of the courtyard was also built.
In 1886 to 1887 a range was built to house submarine miners to the east of the castle. In an Emergency these would lay mines in the Tay Estuary to damage enemy shipping. In 1889 to 1891 a magazine was built within the western enclosure which also led to a major remodeling of the gun emplacements. The last defence related alteration was made in the second world war when a defence post was built within the top of the main tower.
The castle remained in military use until 1932, and later between 1939 and 1949. In 1969, the castle opened as a museum operated by Dundee city council.

This is wonderful. The brooding sky, the reflections, the beautiful castle. It doesn't get better than this.

Love the sky, so moody, nice reflections too.

Striking mood, and I like how it so resembles the ship you posted a few days ago.

I love the mood here too. Fantastic sky and reflections.

Great tone. Was it like that when you were there?
I also like the accompanying historical note =)

I'm reading the last Harry Potter novel at the moment, and this could easily be a scene in that book.. I love the work you have done on the colors..

EYES WIDE SHUT from The library of my soul, United Kingdom

Fascinating information and a photograph that is quite simply, Perfection.

A well interpreted scene. Perhaps the corner vignetting is a bit obvious. best...jerry

A beautiful castle, the reflections of the castle is cool, beautiful colors. Well done

Great sky and I like the color balance.
Cheers

Superb photo!
Myself am ashamed of it a little bit because I did not visit this castle Dundee is near really though to me. You wake it up my interest and as soon as the lights will be gracious I visit to me here.

amy from Nanaimo, BC, Canada

Beautifully dark and medieval.. I LOVE it!!

WOW what a fantastic mirror image!!! Wonderful tones and colours:-)

wow! fantastic shot - love your choice of toning and also like the vignetting - it suits this composition well! thanks for the history as well!

A beautiful classic shot. I like the color and the trouble reflection.