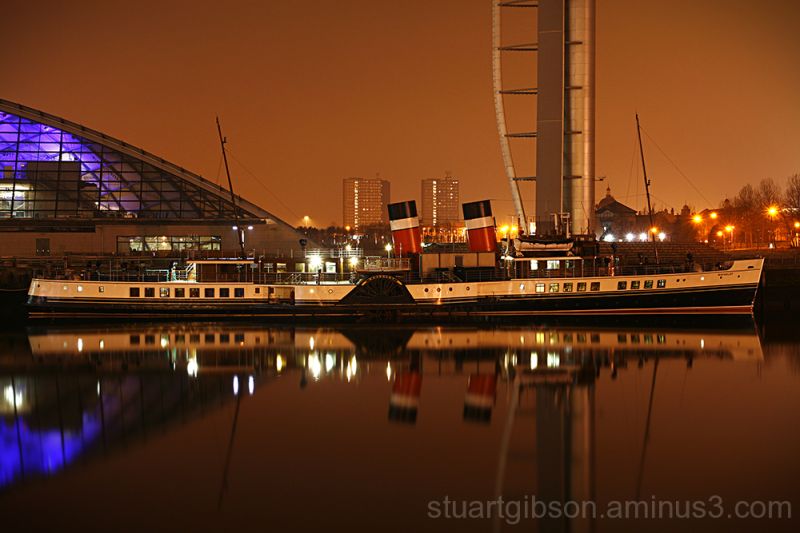 Posted by Stu (From Scotland | Working in Kyoto, Japan) on 6 January 2009 in Cityscape & Urban and Portfolio.

The paddle steamer Waverley is the last operational Clyde steamer, and the last seagoing paddle steamer in the world. Named after Sir Walter Scott's first novel, the Waverley regularly sails from Glasgow and other towns on the Firth of Clyde, the Thames, the South Coast of England and the Bristol Channel; as well as making more infrequent excursions from other British ports.The Waverley was built in 1946 as a replacement for an earlier PS Waverley of 1899 that took part in the WW II war effort as a minesweeper and was sunk in 1940 while helping with the evacuation of troops from Dunkirk. The new 693-tonne steamer was launched in October 1946 at builders A & J Inglis, Glasgow, and entered service in June 1947.

This is a beautiful composition. I really like the light and reflections.

amy from Nanaimo, BC, Canada

Excellent night shot, Stu!! The glow/light is sublime... and that reflection incredible!!

Sorry I've been so MIA... and I see you've been off for a bit too... home to Scotland for a visit (she says in a rhetorical manner as the above post is from jolly old, eh?! LOL!!)

Cracker Stu,you have done the old lady proud with this one !
Regards Jim