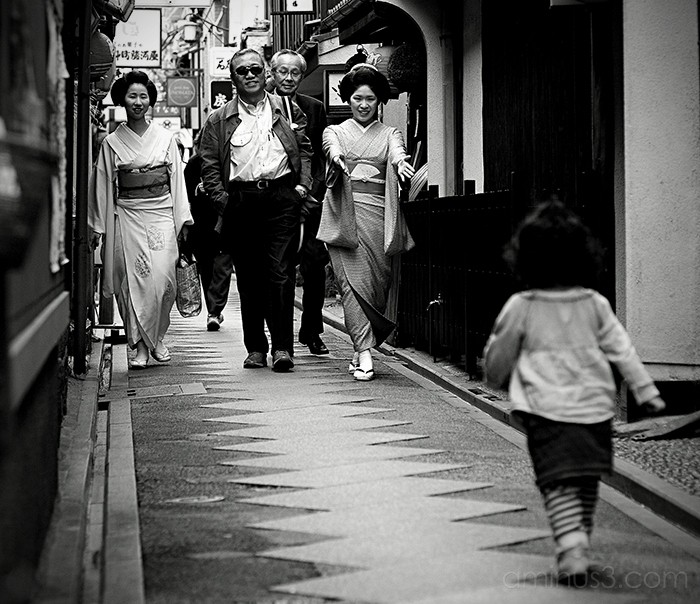 Posted by Stu (From Scotland | Working in Kyoto, Japan) on 30 April 2008 in Cityscape & Urban and Portfolio.

Starting a series looking at some of the sights on this famous street in Kyoto.
Pontochō (先斗町) is a district in Kyoto, Japan, known for geisha and home to many geisha houses and traditional tea houses. Pontochō centres around one long, narrow, cobbled alley. Geisha have existed in Pontochō since at least the 1500s, as have prostitution and other forms of entertainment. Today the area, lit by traditional lanterns at night, contains a mix of very expensive restaurants—often featuring outdoor riverside dining on wooden patios—geisha houses and tea houses, brothels, bars, and cheap eateries.
Wikipedia

Very nice capture of the expressions.

This is a nice B&W shot and choosed a good angle.
well done

Nice catch of the moment! Do you have this image in color as well? I think the kimonos is often very colorful and pretty which make them stand out more.

@Gnarf: Thx Gnarf! Yeah I still have the unedited image in colour. I guess I wanted to focus on the expressions rather than the kimonos for this one.

That's a really great photo Stu!....really top class and a delight to look at on so many levels!

Great b&w image. Interesting perspective. Looks like a "Kodak moment" to me..

Yes I can understand that and you did it great :)