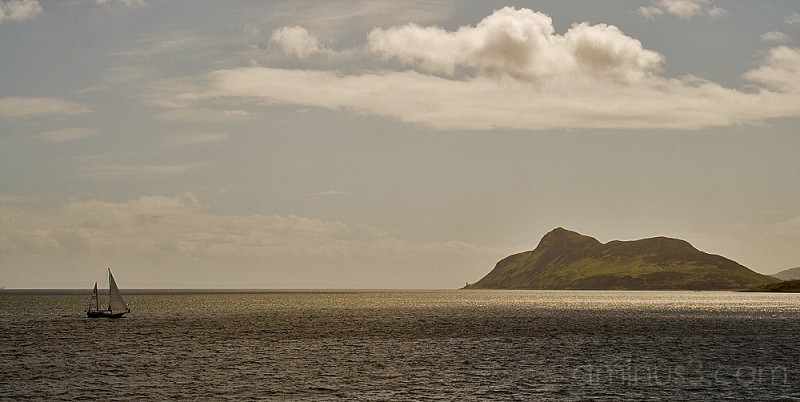 No. 17 - Holy Isle is located in the Firth of Clyde off the west coast of central Scotland, inside Lamlash Bay on the larger island of Arran.
The island is around 3 kilometres long and around 1 km wide. Its highest point is the hill Mullach Mor.
The island has a long history as a sacred site, with a spring said to have healing properties, the hermit cave of a 6th Century monk Saint Molaise, and evidence of a 13th Century monastery. An old Gaelic name for the island was Eilean Molaise, Molaise's Island; this is the origin (via Elmolaise and Limolas) of "Lamlash", the name of the village on Arran that faces Holy Island.
The island is now owned by the Samyé Ling Buddhist Community, who belong to the Kagyu school of Tibetan Buddhism. On the Southern end of the island lives a community of nuns who are undertaking three-year retreats. The remainder of the island is treated as a nature reserve with wild Eriskay ponies, Saanen goat, Soay sheep and the replanting of native trees.

Stu! Beautiful work here.... Fantastic framing and nature too at her best!

Where do you live? Japan or Scotland. Either places sound great to me though, haha.
I like the shade and shine on the same ocean. Nice shot! =)

Fantastic panaromic crop here and an excellent shot Stu. This is worth going on the walls anyday. Have you framed it ?? :)