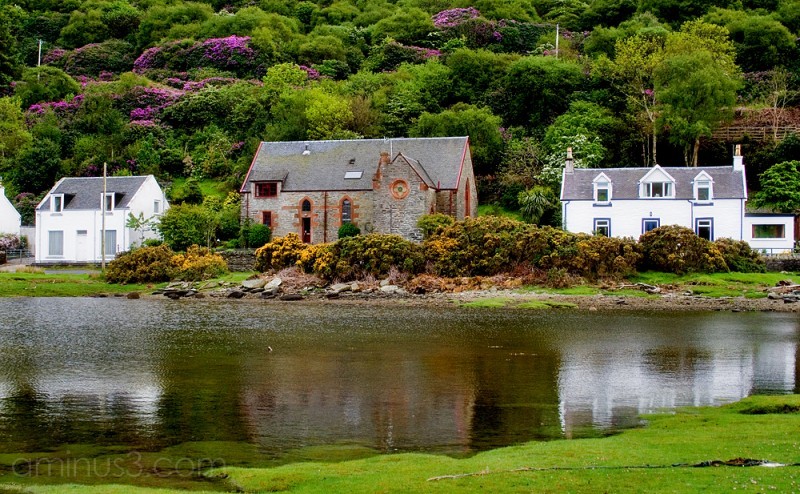 Posted by Stu (From Scotland | Working in Kyoto, Japan) on 2 June 2007 in Landscape & Rural and Portfolio.

The 6th post in the Scotland series brings us back to Arran and the village of Lochranza. The population, somewhat in decline, is around 200 people.
Lochranza is located in the north-western corner of the island and the village is set on the shore of Loch Ranza, a small sea loch.
The village is home to a healthy red deer population and, on the northern shore, grey seals are found year-round. Otters and golden eagles are also spotted in the area.
Lochranza is reputed to have the least hours of sunshine of any village in the United Kingdom, since it lies in a north-facing valley on an island with a particularly high level of rainfall.
Despite this, the village is celebrated in verse:
“ On fair Lochranza streamed the early day,
Thin wreaths of cottage smoke are upward curl'd
From the lone hamlet, which her inland bay
From the lone hamlet, which her inland bay
And circling mountains sever from world ”

The Lord of the Isle - by Sir Walter Scott
Wikipedia

pieceful and beautiful.
I love your Scotland series. I was fascinated by all of them. and they make me feel like going to the Scotland.

I like the reflection and lovely colors! Excellent, Stu!

Nice photo of a lovely place.

Reminds me of Ireland! I can hardly wait to see the wonder Scottland has to offer in person.

@Daniel: Thanks Daniel. I think that when you get there you'll find alot of similarities between Scotland and Ireland, especially if you go to the Western Isles. There's alot of shared history and culture. I hope you enjoy it, and I'm really looking forward to seeing how you photograph it - I'm sure it'll be first rate, as always.

Is that heather on the hill above? How lovely. I wish I could visit.